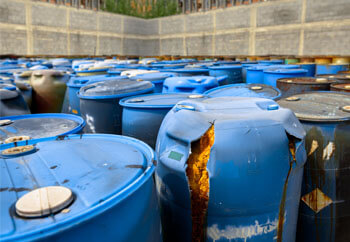 An illegal waste contractor accused of dumping barrels at two locations in Nottingham has been caught out by the GPS data on the hire van he used to dispose of the waste.

Appearing at Nottingham Magistrates Court the accused , Kirk McRoberts, who operated under the name No Need for A Skip Ltd, pleased guilty to illegally depositing waste comprising of 23 barrels of adhesive in Long Eaton in Derbyshire and Cossall in Nottinghamshire.

Evidence was obtained from the GPS data on the hire van he used in order to establish his presence at both illegal dumps sites along with CCTV evidence of the vehicle at one of the sites.

He was fined £900 and was also ordered to contribute £500 towards the cost of prosecution and a £45 government surcharge.

The Environment agency estimated that the accused had avoided disposal costs of £900 in disposing of the waste illegally as he did, again highlighting the economic pressure facing legitimate waste contractors face when in competition with illegal carriers.

In issuing a warning to the company that had contracted the accused to dispose of the waste the `Environment Agency reminded them of their responsibility to ensure that waste is disposed of legally and this acts as a warning to other businesses to check with waste contractors both their legitimacy and how they will  dispose of waste on the business’s behalf.

The acts of illegal waste carriers like McRoberts can have seriously damaging effects on the environment. They also undermine legitimate businesses operating within the confines of the law.

We will continue to work tirelessly to bring those responsible for illegal waste dumping to justice. We’d also like to remind people to check their waste carrier is licensed by the Environment Agency. You are required by law to make sure your waste goes to a site licenced to take it, and could end up with a hefty fine if you fail to do so.