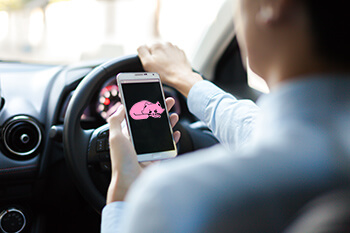 A new campaign from Think the road safety campaigners on behalf of the Department of Transport features a pink kitten in a startling production from LA producers We Are From LA and with music by Aphex Twin.

The campaign focuses on the dangers of using a mobile telephone when driving specifically drawing attention to the potential effects of a lack of concentration for just a few seconds.

The campaign highlights that if the concentration of a driver travelling in a car at 30 mph is broken for just 2.3 seconds the vehicle will cover 100 ft in that time.

The shocking video, designed very much in the genre of a music video, demonstrates this in a clear and effective way. The campaign is designed to appeal to a younger audience, although it will undoubtedly attract broader attention, as those under the age of 35 are three times more likely to use their phone whilst driving than the over 35’s.

The government has already taken strong action in 2017 to reduce to prevent the use of mobile phones whilst driving with earlier campaigns and a a change in the law that means that those caught using a phone whilst driving face 6 penalty points on their licence and a fine of £200 with a second offence leading to a ban and a £1000 fine. Under the new rules, drivers who have passed their test in the last two years can see their licence revoked completely.

Driving while distracted by a mobile phone is completely unacceptable and puts everyone on the roads at risk of serious harm. Police are making use of the tougher penalties to clamp down on this dangerous behaviour – but we have to be clear that when you get behind the wheel it is your responsibility to stay focused and alert.

As this campaign makes clear, it only takes a few seconds of distraction to change lives forever.