What are the Standard Exclusions Under Home Insurance Policies? 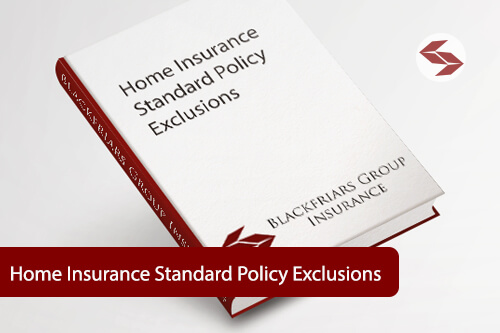 Whilst each insurance company and underwriter will have their own particular policy wordings for home building and contents insurance policies, most will contain a similar list of standard exclusions under home insurance policies.

Often overlooked as a policy exclusion, the policy excess is understood by most insurance buyers, however it is an exclusion as the policy states that the first£x of any loss is excluded. As discussed elsewhere the policy excess is designed to reduce the number and cost of frivolous and smaller claims made against insurers with the reduction in claims handling costs being passed to policyholders in premium savings.

Claims arising from acts of war, whether war be declared or not are considered to be the responsibility of the government and are therefore excluded under home insurance policies.

The policy excludes claims arising from gradual losses other than oil leakage from a fixed heating installation. Pollution or contamination caused by a sudden and foreseen accident is not excluded under the policy.

Exposure to radioactive contamination or the risk of nuclear explosion poses such an unusual and immeasurable risk to home insurers that it is excluded as standard under home insurance policies. Cover is provided instead under pool arrangements to those that are engaged in the handling and processing of radioactive material.

Aircraft travelling at supersonic speeds cause a pressure wave in the air, that we hear as the sonic bang and this sudden change in air pressure can cause considerable damage in the right circumstances. Such damage is excluded ans is instead the responsibility of the Ministry of Defence or the civil airline concerned.

Loss or damage caused by  confiscation, seizure, or destruction by any government, public or local authority is excluded under the home insurance policy. The reasoning is that if the confiscation is justified then the property concerned will have been “illegal” or the confiscating authority will be responsible for the loss or damage.

Losses arising from the failure of a computer or computer system to correctly recognise the date. Originally introduced to protect against the Y2K or Millennium Bug, the exclusion has been retained.

Policies exclude damage caused by the policyholder or member of their household caused by a deliberate act. This is on occasion replaced by the potentially more onerous failure to take all reasonable steps to prevent loss or failure to maintain the property in a good state of repair. These are the principal exclusions under most home insurance policies. As always with “general advice” the details will vary from insurer to insurer and policy to policy but these exclusions are fairly standard within the UK home insurance market.