Is the Steering Lock the “Next Best Thing” In Vehicle Security – Once Again? 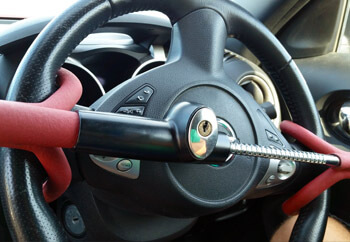 Following on from the report of a 30% rise in car thefts in England and Wales over a three year period to 2016, it appears that the physical steering lock may be making its way back into cars across the UK.

In something of a reversal of fortunes, the physical steering lock at one time a commonplace accessory in cars across the UK is undergoing something of a resurgence as cars thefts have increased as a result of the use of more sophisticated techniques by thieves to overcome electronic car security …. the very security that led to the demise of the physical steering lock around 20 years ago!

With criminals utilising laptops to hack engine management systems, remote unlocking and starting of vehicles using scanning technology which appears to develop at the same speed that manufacturers make improvement to remote technology and engine security, it is perhaps not a surprise that this is leading people back to basics on physical vehicle.

The physical lock which is now, once again, being advocated by the police and motoring organisations offers both a visible physical deterrent that may encourage a potential thief to move on and also requires more traditional “tools” to overcome it, takes the thief more time and makes some noise!

The increased market for these devices is clearly evidenced by the launch of new models and the reappearance of a full range of models across the websites of on-line retailers.