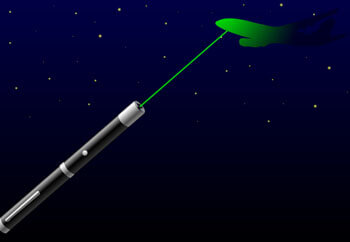 The UK Government has today called for evidence to be submitted regarding the safety aspects of laser pens, the potential and real problems associated with their use with a view to possible introduction of legislation to introduce licencing laws as to their sale and use.

The pens, often sold as toys, are, according to a survey of UK ophthalmologists, responsible for 150 eye injuries in the UK since 2013 .

They are also the subject of great concern from the Civil Aviation Authority (CAA) where cockpits of  aircraft have been targeted by the pens causing concern over the possible effects on the vision of pilots and reported case of an air ambulance helicopter pilot being temporarily blinded by such a device.

The General Secretary of the British Airline Pilots Association, Brian Strutton, echoed the concerns of the CAA stating;

When a laser is shone into a pilot’s eye, they experience a bright flash and a dazzling effect. This can distract them and leads to temporary loss of vision in the affected eye. Startling, dazzling and distracting a pilot at a critical stage of flight has the potential to cause a crash and loss of life. This is especially a problem for helicopters, which operate close to the ground and are sometimes single pilot operations.

Laser pens are already the subject of regulation and licencing restrictions in a number of countries across the world including New Zealand, Australia, Canada, Sweden and the United States of America and the government is requesting evidence from interested parties over an 8 week period before consideration will be given to the introduction of similar regulation in the UK.

The government has stated that it is currently considering licencing schemes, advertising bans and a public awareness scheme to bring the dangers of laser pens to the fore.